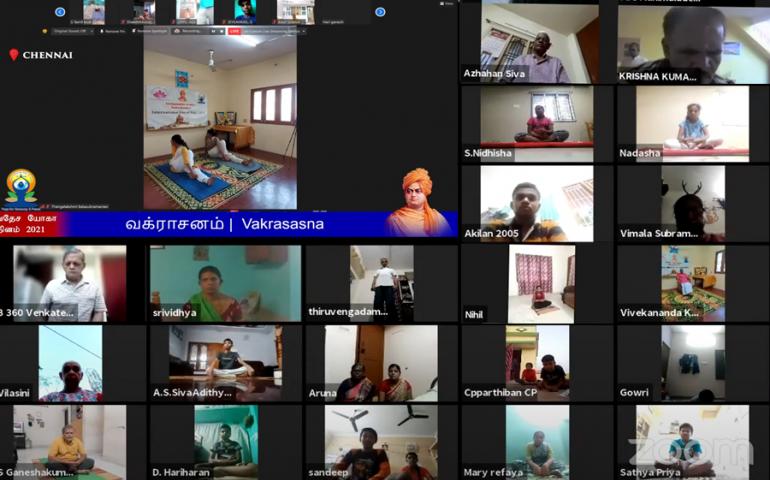 Vivekananda Kendra - Tamil Nadu Vibhag celebrated International Day of Yoga 2021 through online as well as in actual in which around 2000 people participated.

For the International Day of Yoga program, 2551 registrations were received from people all over Tamil Nadu till 18th June 2021. Yoga practice sessions as per common yoga protocol were conducted for all the registered participants on 19th and 20th June 2021. The practice sessions were conducted from 6 a.m. to 7 a.m. on both days through ZOOM which was broadcast live on YouTube also. The yoga demonstrations and instructions were given by Vivekananda Kendra Chennai Karyakarthas.

On 21st June 2021, the collective online program was organised from 6 a.m. to 7.30 a.m. The program was conducted through ZOOM and was also broadcast live on YouTube [Click here to watch]. About 1100 people joined this program via Zoom & YouTube.

The program started with lighting the lamp and prayer. Sri. Saravanakumar, Karyakartha, VK Madurai sang a patriotic song which was followed by welcome address by Smt. Sariga, Vice Principal, VKV Kanyakumari. Mananeeya Sri. Hanumanth Rao Ji, All-India Vice President, VRM & VK gave the Asirvachan in which he expounded the positive effects of Yoga and stressed upon the continued practice of Yoga.

Then, yoga practice (as per CYP) was done for which the demonstration and instructions were given from VK Chennai. The yoga practice session was completed with Sankalpa which was led by Sri. Natarajan, Karyapaddhati Pramukh, VK Madurai. Smt. Thangalakshmi, YCC Coordinator, VRM & VK gave the vote of thanks with a brief introduction of Kendra activities. The whole program was anchored by Kum. Vedha Vidhya, Karyakatha, VK Chennai and it was concluded with Shanti Mantra.

Apart from this online program, several programs were done in actual also with COVID precautionary measures:

Altogether around 2000 people participated in the International Day of Yoga 2021 celebrations in Tamil Nadu Vibhag. Totally 1524 feedback forms were received from the participants and 1539 E-certificates of participation were issued.