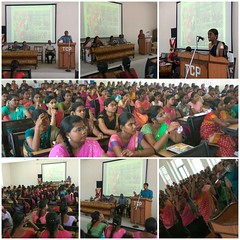 To commemorate the message of Universal Brotherhood given by Swami Vivekananda to the Western audience in the Parliament of Religions at Chicago on 11 September, 1893​, Vivekananda Kendra Madurai Branch organised the ​Universal Brotherhood Celebration​ program ​for​​ B.Ed. students of Thiagarajar College of Preceptors, Madurai on 23rd September 2017 from 10am to 12pm, where 200 students were participated in the celebration. ​

​The ​program started with prayer followed by lighting the lamp by Smt. Sunitha Shailesh Kumar Yadav, madam IGP and A.O. of the college Sri. Ramakrishanan. The welcome address was delivered by Smt. B. Amaliprabha. Smt. L. Saraswathy, well-wisher of Kendra, former principal of Thiagarajar College of Preceptors, introduced Vivekananda Kendra and its activities to students.

The hall was filled with the feel of patriotism when our Karyakartha Sri. D. Natarajan sung the song “Puthiya Bharatham..” repeated by all. A student V.Rajalakshmi read the Chicago Address of Swamiji pleasantly. On talking the aim of the celebration, Karyakartha A. Saravanakumar conducted the game “Role Model” and stressed the model role of everybody in society. The Principal Smt. M.A. Muniammal conveyed the educational thoughts of Swamiji in her presidential address.

In his Speech on “Universal Brotherhood”, Capt. Dr. N. Arun Nagendran, Associate Professor from Thiagarajar College, wonderfully expressed the multi-dimensional personality of Swamiji, his influence in Indian nationalism and the need of universal brotherhood in the present world. The audience relished knowing more about Swamiji Vivekananda. It was such a lecture which made a student came forward voluntarily to share some thoughts of Sri Rama Krishna and Swamiji with all, notably it was his first voluntary forwardness in college. On behalf of Kendra, Sri. D. Natarajan delivered happy address. A formal vote of thanks was conveyed by the staff of the college, Sri. T. Gnaprakasam. Finally shanthi mantra was chanted by Kumari. Sumitra, Nagar Sangatak of VK Madurai. Surely all must have felt the pride of brotherhood while standing for national anthem at last.

​The Students have resolve to take voluntary participation of the students in Kendra programs such as Personality Development Camps, Youth motivational camps and celebrations​.