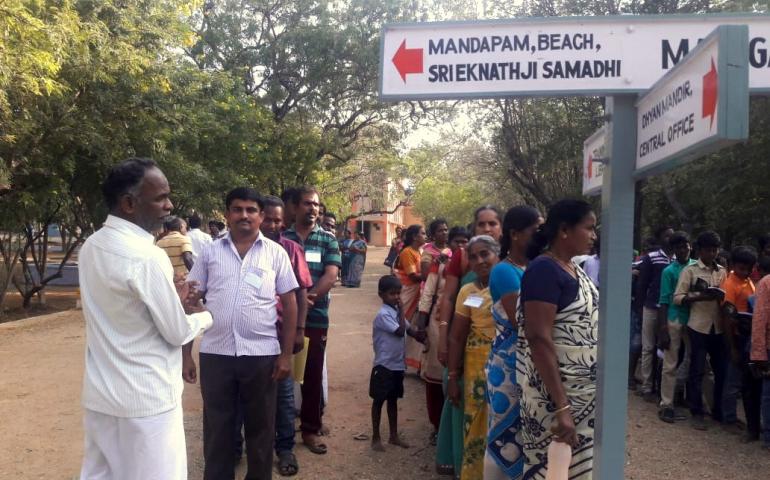 “Through 75 Balwadis, 1952 rural Children were nurtured. In all the Balwadis, Malt along with hygienically prepared, highly nutritive lunch with vegetables were served during the day and in the evening vitamin-rich cereals were provided to the children”.

Eye camps were conducted at 3 places, in Kanyakumari, Nellai and Thoothukudi districts in which 579 were treated for their eye ailments and 104 underwent a cataract operation. 31 persons were given eye medicines and 19 persons were given spectacles.

In our Medicare Programme, 1745 patients were examined and treated for various common ailments, through 14 Rural Medical Centers in Kanyakumari,Nellai and Thoothukudi districts.

4 tailoring units are functioning well in Nellai district with the total attendance of 81.

Yoga Varga has been conducted at 2 places in Aruppukottai and Kovilpatti where 22 persons attended.

In Shivalinga Pooja conducted at 3 places in Kanyakumari District where 199 devotees participated.

Under ‘Adopt a Granny Programme’, 23 destitutes and old people were provided with monthly solatiums, in the form of rice, dhal,oil,etc., for their livelihood and 89 persons provided with rice only in Southern five districts of Tamilnadu.

80 women are being benefited in 4 Self Help Groups in Kanyakumari district.

Monthly Deepa poojas were organized in 224 village temples in five districts of Southern Tamilnadu, in which 8699 ladies participated and offered prayers for the welfare of the self, family and the society.

In 181 Sanskara Vargas, 6581 students participated. The students were taught about the values of Indian Culture through games,lectures & lessons. The feelings of oneness were strengthened among the participants, through patriotic songs and games.

Perents meeting was conducted at 12 places in three districts and 168 parents participated.

College and School level Teachers’ essay competition conducted in the topic of “ The services rendered by great Tamil personalities for Indian Nationalism and all round development of India. For example people like 1. Thirunanachampandar, 2. Thirunavukarasar, 3. Aathisankarar, 4. Ramanujar, 5. Rajaji, 6. Kamarajar,7. C.Subramaniyam, 8. Abdulkalam ” and

“Sri Rama Jeya Rama” Mantra was chanted during Deepa Pooja, Shivalinga Pooja and daily with our Balwadi school children, cultural class students and during monthly meetings by our Balwadi teachers and Social Workers. This month nearly 8,69,865 times mantras were chanted in 84 localities.

This month, we have distributed the rice which was collected through Amrita

Surabhi and Anna Pooja to Balwadi children, old poor people and the institutions

On 14.10.2017 urban level cultural competitions were to be held in Hindu Vidyalaya, Marthandam. It was raining heavily from the down. Being and old building there was leakage on the roof and the floor was wet. The teachers of that School wiped the floor neatly and spread sheet. When we said that we would do that work, they admitted that it was their duty to arrange everything for our

dedicated service. The participants also came in the rain without fail. The teacher’s involvement and the students’ dedication towards the Kendra competitions impressed me a lot.

On 25.09.2017 I had arranged “Thiruvilakku Pooja” in the Amman kovil near our Creche. It became late for me to come. But our Creche children came before me and were singing Bhajan songs. As soon as they saw me all of them ran to me. I had never asked them to come there. During the pooja also they chanted the Mantras following me. Their fluency in saying the Mantras made the villagers surprised. For more than two hours they were with me and helped me. Their affection and devotion touched my heart.

students came for the N.S.S. camp in Vadalivilai, they asked me for prayer song in the night programme. I asked Subiksha to say Mantras on the stage. Her pose and tone attracted everybody. She only started the programmes with her prayer all the seven days of the camp. The last day she was honoured on the stage. Morever during Deepavali function in the village she narrated the sayings of Swami Vivekananda on stage. She was much praised and given prize by the villagers. All praised Vivekananda Kendra and me for training the children in good aspects. This touched my heart.

A Govt. Creche was started in Mannarkovil. They asked for 5 children from our Creche. I had refused first. Then the villagers came and selected 5 kids to go there. I couldn’t say anything. But the very next morning one of the kids named Siva came to our Creche. For one full day he was crying there. Then the other kids also refused to go there. They told that it was not like our School. No rhymes no songs, no stories. The kids attraction towards our Creche touched my heart.

On 14.10.2017 urban level competitions were held in Marthandam Hindu Vidyalaya. In order to collect prize books and sales books I started earlier. Due to the over bridge construction there were many diversions. Somehow I had reached the School. But around 9 o clock there was heavy rain. “How the students would come?” I feared. To my great surprise teachers, parents and participants came in a large number and everything went on smoothly. This event touched my heart.

During the Creche Teachers training camp at Kanyakumari. I got practice in getting up earlier and doing yoga after bath. I came to know and experience the benefits of that. I taught the same to the

cultural class student. Sathyapriya, a students was impressed by ‘Surya Namaskaram’ and trained his younger brother to do it. He had leg and knee pain and was very lazy. After doing Surya Namaskar daily he became very brisk and alert. When she told me this I was much impressed.