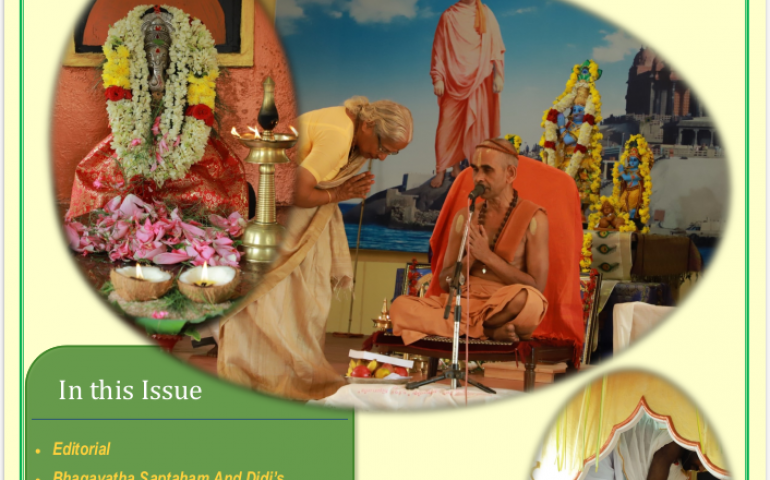 This sloka written on the Smriti Mandapam of Swargeeya Eknathji finds its resonance in Ma. Parameswaranji as well.

I have had the privilege to know Man. Parameswaranji from 1980 when he was the Director of Deendayal Institute, New Delhi. Later, at Vivekananda Kendra, he was like an elder brother, full of loving concern for me. His love and respect for me, he condensed in that one endearing word “Didi” by which he always addressed me who was ten years his junior.

Vivekananda Kendra was blessed to have Mananeeya Parameswaranji as its President since 1995 which also conferred on him the Editorship of Yuva Bharati and other Vivekananda Kendra publications. This provided a rare and unparalleled opportunity of looking at Bharat from the land’s end, almost like what Swami Vivekananda himself experienced, way back in December 1892; but with a difference – now there is already the Vivekananda Rock Memorial and the prestigious Vivekananda Kendra – the two great landmarks in the ascent of independent Bharat to a new glorious destiny. The former attracted not only the whole of our country but also the whole world to the great vision of the master mind of Swami Vivekananda, and the latter, to the practical exposition of that vision, formulated by the great patriot and missionary Shri Eknath Ranade, into the spiritually oriented service mission Vivekananda Kendra, meant for the discerning youth of our country who want to dedicate themselves to the service of the motherland and its people.

Like Swami Vivekananda and Maharishi Aurobindo, Parameswaranji also firmly believed in the unity of existence that is behind the universe that we comprehend with our senses, mind and intellect. There is a deeper reality of which the outwardly visible is only a partial manifestation and a significant symbol. Regarding his perception of our great Motherland, let me quote his own words: “We believe that nation embodies a spiritual power. It is born and not created. It is an organic, living, growing, dynamic entity, unlike in the West where a nation is considered as the product of social, economic or political factors. The Hindu nation is not a hotchpotch of diverse people based on the confluence of blind historical forces. The modern concept of a melting pot wherein communities of people are melted into one single whole or a mosaic in which different people mechanically co-exist, are not applicable in this case. Here the nation is an organic growth from a Divine seed which sprouts and branches out and spreads its foliage with colourful flowers.”

The Vedas describe our nation as the outcome of the Tapas performed by the Rishis who had in mind the welfare of humanity. The nation gradually grows out of the family and community in a natural process of evolution until at last it becomes capable of embracing in its universality the entire world as one family. It is the “Kutumba” that evolves into a world family. The basis of it all is the spiritual concept of the One becoming many.

Without that spiritual ideal no amount of manipulation or mechanical institution building can bring about such a happy consummation of “one world” or a ‘Family of Nations’. His writings reveal how deeply he has imbibed the ideal of Renunciation and Service in his personal life, values which were so dear to Swami Vivekananda. It is well known that Mananeeya Parameswaranji is a first rate nationalist who has sacrificed his all for the country. His writings embody Swami Vivekananda’s ideal of “Be and Make” and hence his writings are capable of rousing the drooping spirit to service and sacrifice for building a glorious India in the future.

His writings and speeches provide a delicious mix of science and spirituality. In many of them, it might be education, politics, or ecology, the matter is raised to the power of spiritual awareness which is typical of the Indian approach. According to him, the Gita presents a comprehensive world-view. It balances the dual needs of spiritualism and materialism. The Gita’s karma yoga is a panacea for the innumerable maladies we face in our day-to-day work. He teaches us to look at our day-to-day problems from the tower of Gitacharya which makes them appear silly and not at all worthy of wasting our precious mental and intellectual faculties. This vision specially focuses on the youth addicted to the pursuit of money-making and senseless worldly distractions.

Like Swamiji, Parameswaranji, expresses his concern at what is ailing our fields of education, society, economics, religion, Hinduism, feminism and so on. He often wrote about the freedom of worship – the concept of Ishta devata – that Hinduism offers to its followers. Again, worshipping God as Mother has given tremendous strength to Hinduism. Its direct effect was the elevation of womanhood to a height undreamt by other religions.

He also pointed out how from this height, due to the insecurity that women came to experience over centuries of invasions from alien cultures, our womanhood had to suffer so many indignities from which she is yet to find release. Like many of the nationalists of his calibre, Mananeeya Parameswaranji never failed to give out his clarion call to the youth, to live up to the grand Indian ideal and vision bequeathed to us by Swami Vivekananda, Maharishi Aurobindo and a host of others. He urged the youth to dedicate themselves for the service of the country and our people and enthrone Mother India as the Jagat Guru on her Eternal Throne.

In spite of his strong opinions and convictions he was ever soft in dealing with others including the so called ideological enemies. That is what earned for him the title of ‘Ajathasatru’, one who has no enemies. Added to all these,, was his surrender to the great teachers, Sri Ramakrishna, Sarada Ma and Swamiji which added to the softness of his personality. As both of us had taken ‘diksha’ from Sri Ramakrishna Math there was always a golden chain binding us, an unusual brother–sister relationship. That thread would be my source of inspiration as I think of him again and again.