The goal which all the Vedas declare, which all austerities aim at, and which men desire when they lead the life of continence … is AUM.

"The goal which all the Vedas declare, which all austerities aim at, and which men desire when they lead the life of continence … is AUM. 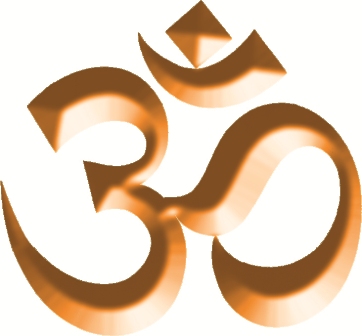 AUM or OM is of paramount importance in Hinduism. This symbol is a sacred syllable representing Brahman, the impersonal Absolute of Hinduism — omnipotent, omnipresent, and the source of all manifest existence. Brahman, in itself, is incomprehensible; so a symbol becomes mandatory to help us realize the Unknowable. AUM, therefore, represents both the unmanifest (nirguna) and the manifest (saguna) aspects of God. That is why it is called pranava, to mean that it pervades life and runs through our prana or breath.

Although AUM symbolizes the most profound concepts of Hindu belief, it is in use daily. The Hindus begin their day or any work or a journey by uttering AUM. The sacred symbol is often found at the head of letters, at the beginning of examination papers and so on. Many Hindus, as an expression of spiritual perfection, wear the sign of AUM as a pendant. This symbol is enshrined on every Hindu temple premise or in some form or another on family shrines.

It is interesting to note that a newly born child is ushered into the world with this holy sign. After birth, the child is ritually cleansed and the sacred syllable AUM is written on its tongue with honey. Thus right at the time of birth the syllable AUM is initiated into the life of a Hindu and ever remains with him as the symbol of piety. AUM is also a popular symbol used in contemporary body art and tattoos.

The Eternal Syllable: According to the Mandukya Upanishad, "AUM is the one eternal syllable of which all that exists is but the development. The past, the present, and the future are all included in this one sound, and all that exists beyond the three forms of time is also implied in it".

The Music of AUM:

AUM is not a word but rather an intonation. It, like music, transcends the barriers of age, race, culture and even species. It consists three Sanskrit letters, aa, au and ma which, when combined together, make the sound AUM or OM. It is believed to be the basic sound of the world and to contain all other sounds. It is a mantra or prayer in itself. If repeated with the correct intonation, it can resonate throughout the body so that the sound penetrates to the centre of one's being, the atman or soul.

There is harmony, peace and bliss in this simple but deeply philosophical sound. By vibrating the sacred syllable AUM, the supreme combination of letters, if one thinks of the Ultimate Personality of Godhead and quits his body, he will certainly reach the highest state of "stateless" eternity, states the Bhagavad Gita.

The Vision of AUM:

Om provides a dualistic viewpoint. On one hand, it projects the mind beyond the immediate to what is abstract and inexpressible. On the other hand, it makes the absolute more tangible and comprehensive. It encompasses all potentialities and possibilities; it is everything that was, is, or can yet be. It is omnipotent and likewise remains undefined.

The Power of AUM:

During meditation, when we chant AUM, we create within ourselves a vibration that attunes sympathy with the cosmic vibration and we start thinking universally. The momentary silence between each chant becomes palpable. Mind moves between the opposites of sound and silence until, at last, it ceases the sound. In the silence, the single thought—AUM—is quenched; there is no thought. This is the state of trance, where the mind and the intellect transcend as the individual self merges with the Infinite Self in the pious moment of realization. It is a moment when the petty worldly affairs are lost in the desire for the universal. Such is the immeasurable power of AUM .