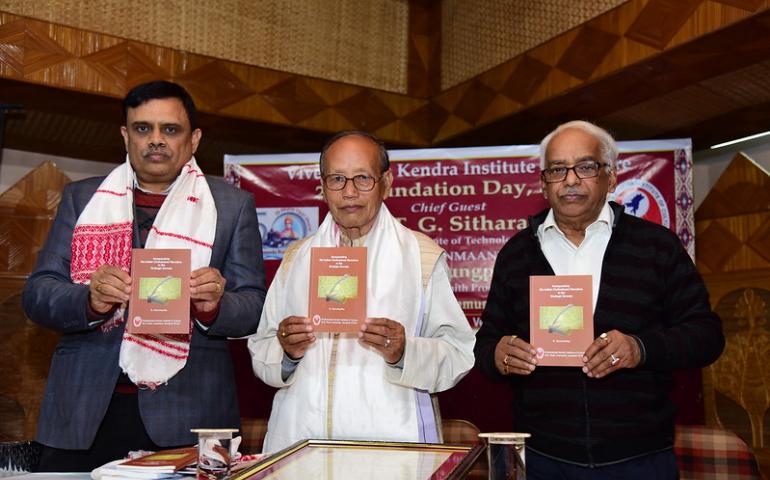 The programme was attended by dignitaries, invitees, eminent personalities and Vivekanand Kendra’s Karyakakarta of Assam The Report of Activities was presented by VKIC depicting its vision and the work done by the Institute during the year 2019. Dr. P.C. Bhattacharya, Director (RAC) of VKIC delivered the welcome address. Speaking on the significance of the Foundation day and VKIC, launched in 1996 a Vivekanand Kendra Kanyakumari, initiative for research and documentation of the communities of India’s North East with the motive Sanskriti Aikyam Pushanaati which means Culture Nurtures Unity he said that the VKIC directly involves the more than 236 tribes and sub tribes through research, documentation, symposium etc. of community concerned to understand the richness of the traditional system and think on conflict avoidance and not conflict resolutions. Dr. Bhattacharya also mentioned that VKIC has been nominated as one of the 10 institutional member in the sub commission social sciences in the reconstituted Indian commission for the cooperation with UNESCO (INCCU).

Sri Dangmei Lungpuijei Kabui an indigenous faith promoter from Manipur was honored with its prestigious VKIC Sanmaan for 2020 at the function for his contribution and devotion to preserve and foster the age old tradition, culture and Dharma of the Nation for providing education to down trodden youth of the far flung villages without looking for any assistance from Govt. and also to bring out peace and tranquility, re establishing the unity amongst the communities of North East India.

The VKIC Sanmaan was presented by the Chief Guest of the function Dr. T.G. Sitharam Director of Indian Institute of Technology, (IITG) Guwahati. The award comprises a Seleng chadara, citation, a memento, a plaque and a set of VKIC publications along with a cash component of Rs 25000/-(Twenty Five Thousand only). 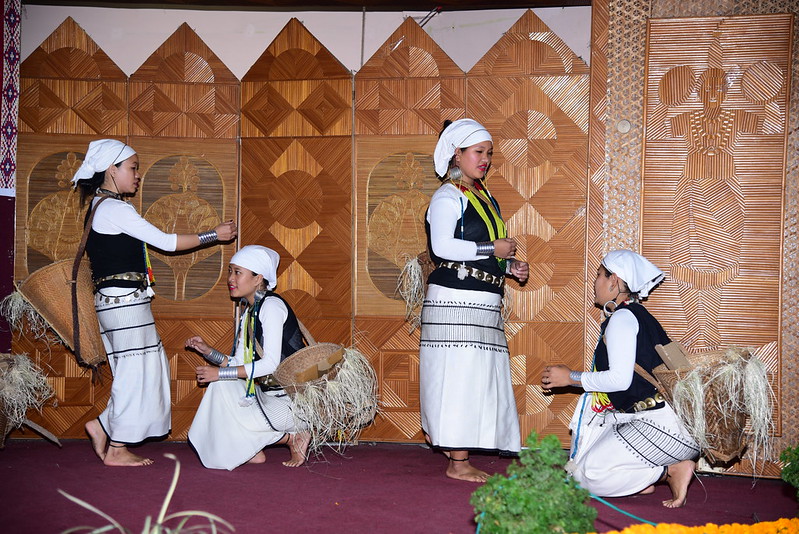 In his acceptance speech, Sri D. L. Kabui expressed his gratitude to the VKIC and spoke about his work to preserve and promote the cultural heritage of the Kabui Tribes and its Kabui Sanskriti. He underlined the virtues of its ancient faith and mentioned about 34 different tribes (Jana jati) in the state of Manipur, Assam and Nagaland. He told that the Kabui tribe has its own beautiful ethnic culture and Kabui dance is known to the world but at present Kabui tradition and culture losing its significance. He further said that let any be the reason I stand for the tradition and culture.

He thanked the VKIC for conferring on him the award and said it is a proud moment and the honor was not just for me but for the entire Kabui tribes of Manipur. He also said he has worked for the upliftment of Kabui tribe in every aspect at his personal level and will continue to do so in the future also. He has been working as an editor, since 1980. He translated the holy Granth “Bhavat Geeta” into “Kabui Dialect”.

Chief Guest of the programme Dr. T.G. Sitharam reflected on the work of IIT Guwahati as how it is playing an important role in society by imbibing value education to the student not only by giving technical or science education but involving regular yoga sessions. He also mentioned that how he is connected with VKIC as earlier he was associated with Dr. H.R. Nagendra, the worker of Vivekanad Kendra in S-VYASA University, Bangalore.

The Chief Guest and the other dignitaries released the New Books and 4 reprinted versions of the books respectively from VKIC Publication. The VKIC New publication of the books are Diversified Unity Focus North East India, Bhartiya Bhakti Andolonot Asomor Abadaan , Incorporating the Indian Civilization Narative in the Strategic Domain by S. Gurumurthy and also the current Issue of Journal Quest published by VKIC.

Next most awaited attraction of the function was a scintillating cultural performance by the artists of Galo Toupe from Arunachal Pradesh. The group has performed a ritual of the Galo Community .It was a traditional folk dance of Galoo Tribe one of descended of Tani Clan. Dr. P.C. Bhattacharya (RAC) of VKIC facilitated the members of Galo Troupe.

The shining stars of VKV who have shown their Excellency by securing highest rank in Arts/Science and Commerce stream were also be felicitated by the chair person Sri Deepak k. Borthakur and Director (RAC) of VKIC.  Certificates have been distributed to the participants by the Chair person and the Director of VKIC, who have completed the six months course of “My India, Eternal India”. The formal vote of thanks was offered by Dr. Rahul Mazumdar after which, the Foundation Day 2020 celebration was concluded with Shanimantra chanted.