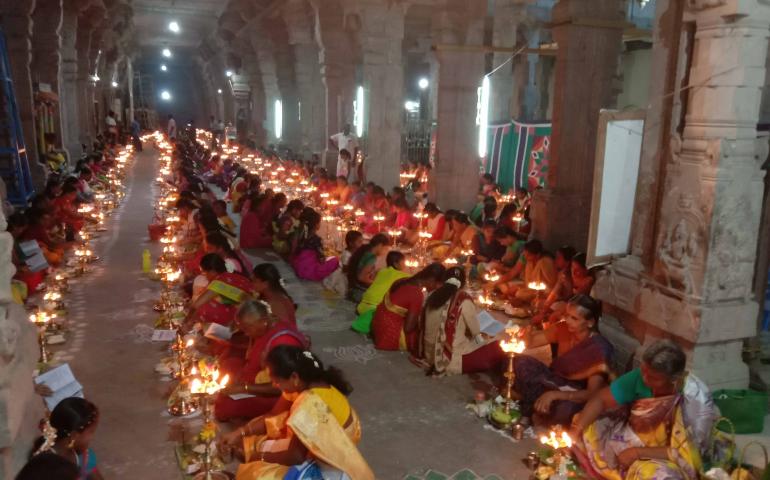 Service activities
1.“Through  75  Balwadis, 1679 rural Children  were nurtured. In all the Balwadis, Malt along with hygienically prepared, highly nutritive lunch with vegetables were served during the day and in the evening vitamin-rich cereals were provided to the children”.
2. Eye  camps  were  conducted  at 3 places, in  Kanyakumari, Nellai and Thoothukudi districts in which 717 were treated for  their  eye ailments  and 144 underwent a cataract operation. 34 persons were given eye medicines and 37 persons were given spectacles.
3. In  our  Medicare  Programme, 1681   patients  were  examined  and  treated for  various common  ailments,  through  14  Rural Medical Centers in Kanyakumari, Nellai and  Thoothukudi districts.
4. 5 tailoring units are functioning well in Nellai district with the total attendance of 94.

Cultural activities
5. Yoga Varga has been conducted at  2 places in Aruppukottai and Kovilpatti where 26 persons attended.
6. Vivekavani Subscriptions including 78 and seven Patrons were collected.
7. Shivalinga Pooja conducted at 3 places in Kanyakumari District where 212 devotees participated.
8. Under  ‘Adopt  a  Granny  Programme’, 28 destitutes  and old people were provided with monthly solatiums,  in  the  form  of  rice,  dhal,oil,etc., for their  livelihood   and   121  persons provided with rice only in Southern five districts of  Tamilnadu.
9. 94 women are being benefited in 5 Self Help Groups in Kanyakumari district.
10. Durga Pooja conducted at 3 places, in Kanyakumari District 246 devotees participated.
11. Through various branch centers, including Thoothukudi A.O.  and book stalls, literature books were  sold  for Rs.34,450/- .
12. Monthly Deepa poojas were  organized in 221 village temples in five  districts   of   Southern  Tamilnadu,  in  which  8082  ladies participated  and  offered   prayers  for the welfare of the self, family and the society.
13. In 170 Sanskara Vargas, 6514 students participated. The students were taught about the values of Indian Culture through games, lectures & lessons.  The feelings of oneness were strengthened among the participants, through patriotic songs and games.
14. Under Amrita Surabhi Scheme, our Kendra workers collected 559 Kgs of rice from Southern
five districts.
15. Yoga camp performed in Kovilpatti 54 gents participated.
16. Cultural class teachers training programme was conducted in Surandai,Tirunelveli district and 40 teachers participated.
17. Parents meeting was conducted in Ramnad district at3 places and 65 participated.
18. 1008 Deepa Pooja conducted on 9th, 15th,& 23th June 2019  respectively in Nainarkovil -
Sri Sowuntharanayagi sametha Arulmigu Naganathar Temple, Ambai - Sri Agastheeshwarar Temple and Tiruchuli- Arulmigu Thunaimalaiamman Sametha Thirumeninatha Swami Temple and  where 700, 861 and  1012 devotees participated from 70 villages. Before Deepa Pooja Mathru Sammelan and precession conducted in which Cultural class,  Balwadi students dramas, and songs  performed.   Kendra Varga performed in Aruppukottai two places and 46 persons participated.
19. An international Yoga day programme was conducted in 14 places from Southern five district
890 person participated.
20.  “Sri Rama  Jeya  Rama” Mantra  was  chanted  during  Deepa Pooja, Shivalinga Pooja  and  daily with  our  Balwadi  school  children, cultural class  students and during  monthly  meetings  by  our  Balwadi  teachers and Social Workers. This month nearly 7,76,624 times mantras were chanted in 84 localities.

Inspiring Incidents
R.Mallika – Andarkulam – Kanyakumari district
There are 32 kids in our Creche. One week back the fan didn’t work and the kids couldn’t sleep because of sweating. I searched for somebody to repair the fan. K.Anish, +1 student (an old student of our Creche) came forward to get it repaired. He took the fan to the electric shop and returned back within one hour. He himself connected the fan and checked properly. His volunteer service in that young age impressed me. All the kids were happy and thanked him.

R.Reginal – Thengamputhoor _ Kanyakumari district
One day I was walking towards the bus stop. At that time a student named Santhanalakshmi ran to me and fell down on my foot asking me to bless her as her X STD Exam started that day. She studied in our Creche. I was stunned by her deed and blessed whole heartedly. She introduced me  proudly to her friends that I was the ladder pushing her up in her childhood. She also told me that she stood first in her class. I felt much proud of that incident and thought of Swamiji for his blessings. We are kept in high position because of Kendra service.

P.Muneeswari – Chekkarakudi – II – Thoothukudi district
On 18.03.2018 during the Deepa Pooja at Ottapidaram, we had staged a skit on “Awake Hindus”. After seeing the skit, a lady came to me and congratulated me for acting humorously. She also told that all the Hindus must see that because many of them didn’t know how a Hindu should be. She assured me that next time she would bring all her neighbors to the mass pooja. I felt proud on hearing the effect of our effort.

V.Somasundari – Chekkarakudi – 1 – Thoothukudi district
A child named Akkinimuthu is studying in our Creche. One day her mother fetched him saying that he had fever the day before. She asked me to inform her if fever repeated. Keeping it in mind, the child came to me again and again saying “Teacher I have fever”. I felt that he was OK. In order to divert him I asked him to say Sivapuranam. The other kids also started saying Sivapuranam. Then all went to sleep. In the evening I asked Akkinimuthu how he was. He replied me that his fever had gone as he said Sivapuranam. He also repeated the same to her mother also. She felt very happy on his faith and at home she started chanting Sivapuranam. This event touched my heart.

A.Kanagambaram – Kovilpatti – Thoothukudi district
Once I was walking along the roadside of Kulathur. A lady had approached me and asked when the summer class would start. I asked her to wait for the notice and asked her the reason. She replied me that after attending the class last year her daughter had developed many good habits such as feeding crows, drawing kolam with rice flour and so on. Her awareness and faith touched my heart.

Packia Saroja – Peyankuzhi – Kanyakumari District
On 07.02.2018 some people from Aralvaimozhi came to Vivekanandapuram for routine eye checkup after getting operated through our free eye camp. Unfortunately they had forgotten to bring their Check-up cards. The doctors asked them to bring them from their homes. As they couldn’t go and return before the close of the camp they were confused. A lady accompanied them wisely contacted the people at home and asked them to send the needed cards through whatsapp. Then everything went on well. The timely help of quick technology touched my heart.

S.Shanmuga Bharathi – Vallioor –Tirunelveli district
On 25.02.2018 an aged person who underwent cataract operation in one eye camp through Kendra free eye camp the previous year attended the camp at Swami Sivananda Hospital, Pathamadai. He was selected for operation in the other eye. Without any hesitation he happily accepted and told that because of the previous camp he got one eye operated and could see well. Hence he had no fear and much confidence in Kendra eye camp. His confidence touched my heart.