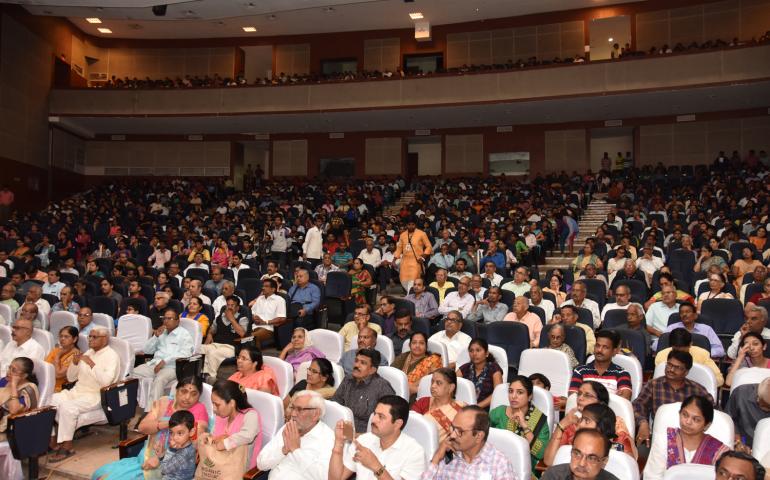 In his fabulous speech he said, 'Greetings to all,all time all best wishes. Now science is advocating with the theory of quantum mechanics that if a person thinks positive towards world,the same thing happens.The thoughts of spirituality has a strong base of science.

All religions are connected with Omkar. When we talk about best wishes, in Sanskrit it is 'Sarveti sukhina santu'. In Prakrit when it comes to Buddha and Mahavira's teaching,the phrase is 'Bhavtu sabba manglam' and as we inherit Varkarari sampradaya, Dnyanoba Tukoba , the phrase is ' Jo je wanchil to te laho'.

Hindu religion is all inclusive. Theist or atheist even consumerist has a place in this religion. It is considered as a school of thought. He further dipicted the life and teaching of Swami Vivekananda. Worship to man is worship to God.By giving an example of Swamiji's life he said,as soon as the caste system ends, Bharat will become super power.Be fearless,face the circumstances with brave heart,and the victory is yours. Analyse the things in the light of Swamiji's wisdom. Be rational. Swamiji never had a blind faith. He was curious to know about God. He attained self realization by the grace of Ramakrishna Paramhansa.At Kanyakumari when he sat on a rock in the sea,he realised goal of his life. In his motivate speech, Avinashji elaborated Swamiji's whole life, meeting with the King of Khetri,about their friendship,how he gave him name ' Vivekananda'.Swamiji was rational so he got the name ' Vivekananda'.

He said in the calamity of Kerala 240 youth aspired by swamiji's thinking, went to Kerala to help the affected peoples.They are working selflessly. And fortunately his students who are now officers at Kerala and also aspired by Swamiji,are helping them. Officers have the power,with that they can serve the people. Be a government official for the welfare of the society.Be a good human being and have the attitude 'country first.' On this occasion a drama was performed by the children of verious Sanskar Vargas. The short play was  based upon Swamiji's speech at Chicago.Anaya presented a song on Swamiji' life.Both were appreciated by Avinashji. He advised Kshitij Kaushike who played Swamiji's role.To dress like Swamiji is easy but to be like him is more important.Its a responsibility. Swamiji has chosen you for his work. While speaking about the song sung by Anaya,he said,she has presented the song with full Force.This is the force of Mother Goddess.Durga, Bharat Mata.Bhatiya women carries a force in her.she is brave and can face any circumstances.She never cry.She use to fight and win.

Instead of running after a successful life one should try to make it meaningful. Avinashji  concluded his  enchanting speech with the same words which he uttered at the beginning,' Greetings to all,all time all best wishes.' On this occasion Vivekananda Kendra Kanyakumari's state head Mr.Abhay Bapat and Mr.Sanjay Jadhav were present on the stage. Ajinkya Ujlambkar gave an introduction of chief guest.Manasi Bhadane gave preface of the programme. Anant Bhagvat gave vote of thanks.The programme was concluded with 'Pasaydaan'- Universal prayer.