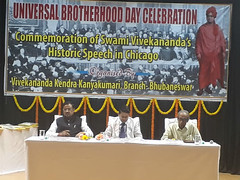 Noted journalist turned author and senior fellow for Islamism and Counter-radicalisation initiative at the Washington DC based Middle East Media Research Institute (MEMRI) Tufail Ahmed, who was the Chief speaker on the occasion, highlighted the need for universal brotherhood in present day global scenario. Citing the famous speech of Swami Vivekananda at The World Parliament of Religions 125 years ago, the former scribe of BBC Worldwide Service and author of the book ‘Jihadist Threat to India – The case for Islamic Reformation by an Indian Muslim’, impressed upon the need for looking at Universal brotherhood from a holistic perspective including the poor and vulnerable sections of the society instead of limiting it only to religion and communities. Lack of wider vision is leading Muslim youth to exclusive Jihadi tendencies. Throwing light on the relevance and usefulness of Swamiji’s speech and values in the present day context, he underscored the need for universal brotherhood to maintain peace and all round development of human race irrespective of their religion.

Winners of various school, college and university level competitions organised by Vivekananda Kendra Kanyakumari Bhubaneswar branch in the first week of September were felicitated with prizes and citations on this occasion. It may be noted that student groups from 16 schools of the city participated in a Group yoga competition organised by the Kendra on 2nd and 3rd September. The team from DAV Public School, Pokhariput won the first prize in group yoga competition while the 2nd prize went to joint winners DAV Public School, Chandrasekharpur and Shivanand Centenary School. University High School, Vanivihar won the 3rd prize in the competition. The 1st prize winning students of DAV Public School, Pokhariput performed a group Suryanamaskar sequence at this special ceremony celebrating Universal Brotherhood day.

Also, the winners of the interschool competition on Odia and English recitation of the epic speech of Swami Vivekananda held on in first week of September were felicitated on this occasion. Students from around 30 different schools in the city participated in this competition. Similarly, the winners of ‘Swadhyaya’ examination on the book containing messages of Swami Vivekananda on SELF development, held at various colleges and departments of Utkal University were felicitated on this occasion.