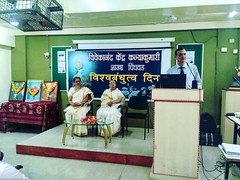 He spoke to the students of the college and stressed on the youth of today to not just focus on Food-Clothing-Shelter but also try to live for others. Every year over 400 hundred army men die fighting against the terrorists. Learn to respect the freedom we have got. He also stressed on the fact that don't fall prey to the negative publicity created by the media or channels for their own benefit. Learn to respect our soldiers just as you do to our cricketers, film stars and sportsman. We have earned so many medals during the war and against terrorists but it is never very easy. it always comes at a price with lives of so many soldiers who fight for us.

During the interactive session he answered the question and concerns of the students about the situation in our country, life in India army etc. Smt Arunatai Marathe also spoke with the students and stressed on the youth to pay attention of whats going around and be a responsible citizen. Also present with her were Mrs. B.S. Kunte - Director of the college, Mrs Mugdhatai who also gave a brief overview about Kendra activities and programs carried out in Chinchwad.