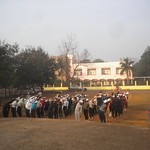 In the University it was decided that the theme of the Parva would be “Love India Serve India”. Following programmes were organised by the youth karyakartas of the University:

1.) In Utkal University campus Bharat Mata Pujan was done by youth in front of PG Boys Hostel no.1 daily in the evening. Swadesh Mantra was read in lead and follow pattern daily after the pujan. Average attendance was 20.

2.) As an aspect of Serve India - Winter clothes were collected from the staff quarters of the University  and distributed among the street and pavement dwellers of Bhubaneswar on 10th January night.

4.) A “Run for the Nation” was held in the University campus on 12th morning at 7.00 am.Dr Santosh Tripathy – Director, College Development Council, Utkal University flagged off the run. 81 students completed the run.

A good youth team was formed in the University in the entire effort.