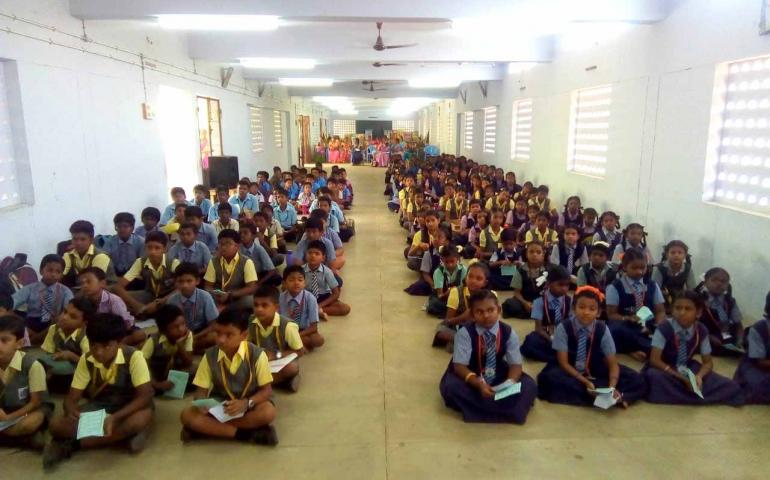 “Through 75  Balwadis, 1675 rural Children  were nurtured. In all the Balwadis, Malt along with hygienically prepared, highly nutritive lunch with vegetables were served during the day and in the evening vitamin-rich cereals were provided to the children”.
Eye  camps  were  conducted  at 3 places, in  Kanyakumari,  Thoothukudi and Ramnad districts in which 517 were treated for  their  eye ailments  and 75 underwent a cataract operation. 15 persons were given eye medicines and 18 persons were given spectacles.
In  our  Medicare  Programme, 1568   patients  were  examined  and  treated for  various common  ailments,  through  14  Rural Medical Centers in Kanyakumari, Nellai and  Thoothukudi districts.
4 tailoring units are functioning well in Nellai district with the total attendance of 85.

Cultural activities
Yoga Varga has been conducted at  2 places in Aruppukottai and Kovilpatti where 24 persons attended.
Vivekavani Subscriptions 177 collected and two Yuva Bharathi.
Shivalinga Pooja conducted at 3 places in Kanyakumari District where 215 devotees participated.
Under  ‘Adopt  a  Granny  Programme’, 29 destitutes  and old people were provided with monthly solatiums,  in  the  form  of  rice,  dhal,oil,etc., for their  livelihood   and   121  persons were provided with rice only in Southern five districts of  Tamilnadu.
94 women are being benefited in 5 Self Help Groups in Kanyakumari district.
Durga Pooja was conducted at 3 places in Kanyakumari District and 245 devotees participated.
Through various branch centers, including Thoothukudi A.O.  and book stalls, literature books were  sold  for Rs.64,092/- .
Monthly Deepa poojas were  organized in 222 village temples in five  districts   of   Southern  Tamilnadu,  in  which  7784  ladies participated  and  offered   prayers  for the welfare of the self, family and the society.
In 171 Sanskara Vargas, 6225 students participated. The students were taught about the values of Indian Culture through games, lectures & lessons.  The feelings of oneness were strengthened among the participants, through patriotic songs and games.
Under Amrita Surabhi Scheme, our Kendra workers collected 734 Kgs of rice from Southern five districts.
Parents meeting were conducted at 4 places, in Thoothukudi district in which 105 devotees participated.
Balwadi  teachers refresher camp was held  from  30.06.2019  to  03.07.2019. Teachers from Kanyakumari, Tirunelveli, Thoothukudi, Ramanathapuram  and Virudhunagar districtsattended the  camp. Totally  130  teachers  and 18  workers  attended  the  camp. During the camp all the teachers were well trained.
Social workers  refresher camp was held from 05.07.2019 to 08.07.2019 at Kanyakumariand 22 workers participated. All Social Workers visited Thiruparappu falls.
On 8th July Vahana pooja was performed. On 4th July 2019 Swami Vivekanandar Maha samathi day was observed with Anna Pooja and Social Workers Cultural  Programme  at  Kanyakumari. In that  function  nearly 23,120 kg. rice was collected in  Tirunelveli and Kanyakumari district. More than 1000 persons came from southern five districts  and  participated  in  this  programme. Education Aid was distributed to 17 needy students worth of  Rs.59,500/-  sponsored  by  Sriganesh  Nantha  Gopal -  Coimbatore, Dr. Maria Pia  Machi, Siva  Priya Ashramam -  Curtralam. More than  3000  persons  were  served with  noon  prasatham including Vivekananda Kendra Vidhyalaya Kanyakumari,Vallioor students and teachers .
Guru Purnima was celebrated at Southern five districts. Nearly at 77 places and 7263 participated in this programme.
Anna Pooja & Gurupoornima celebration was conducted on 16.07.2019 in  Ayyappa College at Nagercoil and 815 persons participated and 500 kg. rice collected.
1008 Deepa  Pooja conducted  on 28.07.2019, in Pathmanapapuram  Arulmigu Nainar Neelakanda Swami  Temple, where 965 devotees  participated from 42 villages in Kanyakumari district. Before Deepa Pooja Cultural class and Balwadi students’ dramas and songs were staged.
“Sri Rama  Jeya  Rama” Mantra  was  chanted  during  Deepa Pooja, Shivalinga Pooja  and  daily with  our  Balwadi  school  children, cultural class  students and during  monthly  meetings  by  our  Balwadi  teachers and Social Workers. This month nearly 8, 37,928 times mantras were chanted in 84 localities.
This month, we have distributed the rice which was collected through AmritaSurab and Anna Pooja to Balwadi children, old poor people and the institutions as mentioned below :
Mouzhanagurusamy madam, Thottiodu - Kanyakumari district - 120 Kgs
Guganatheeshwarai Kovil - Kanyakumari district - 200 Kgs
Inspiring Incidents
A.Sankaravadivu – Chekkarakudi – Thoothukudi district
I am working in Chekarakudi –  Creche. Once I went to Meenakshi paati to distribute the notice for Srivaikundam eye camp. We were distributing the notice in the hot summer day. A sister named Mariammal pitied us and invited kindly to take some coffee or tea in her house. When we rejected she insisted us to have some water at least. Her caring and kindness towards us touched my heart. On the day of the camp a grand old man from Thozhappannai village came to the camp. His name is Lakshmanan. He is running a petti shop in the village. Doctor had advised him to wear spectacles having no money he approached me. We have arranged the specs through Kendra. He felt much happy and blessed all our Kendra service whole heartedly.
A.Kanahambaram – Kovilpatti – Thoothukudi district
On 26.11.2017 our free eye camp was conducted at Soorangudi. One of the beneficiaries of the camp came to me wearing the spectacle issued in the camp. She told me that she had got back her lost eye sight and was able to go for work in the woods. Her happy and grateful words made me happy and contented.

S.Renugabai – Peyankuzhi – Kanyakumari district
On behalf of Indra Gandhi library Youth, a free eye camp was held at Aadhi Dravida Welfare Hr. Sec. School, Kalingarajapuram on 17.09.2017. Thiru. Kanagaraj of that village was advised for operation at  Aravind Eye Hospital, Tirunelveli. He is a wood cutter in the forest. After getting operated he got his eye Sight back. He came to me and said that I thought of losing my life when my eye sight was affected. Because of my assurance only he attended the camp. He expressed his gratitude and happiness to me with tears and blessed me. That day I had realized the real effect of my fruitful service. The Credit goes to Kendra only.

K.Kaleeswari  - Nagalapuram – 1 – Thoothukudi district
One day I asked the kids to chant Rama Nama for getting rain. We chanted Sri. Rama Jeyam with that intention. Really there was rainfall in the evening. We were all happy and enjoyed the rain. The next day a girl named Ushakavi recalled that and insisted me to chant Mantra to get rain. Her faith made me happy.

S.Kavitha – Kallaveerianvilai – Kanyakumari district
Once I went to Ethamozhi Primary School for some personal purpose. While I met the Head Master. She welcomed me happily and introduced me to the P.E.T.there. She told her that the students from Vivekananda Creche are more initiative and intelligent compared to the other School kids. Another teacher standing nearly came forward and enthusiastically admitted that she was an old student of Kendra Creche and myself was her teacher then. That situation made me proud of being a service worker in Vivekananda Kendra.

C.Leela –Peyankuzhi – Kanyakumari district
This touching incident happened while collecting rice in Pulluvilai for the Annapooja at Kanyakumari  Smt.Jeya, a social worker there welcomed me and came forward to help me voluntarily. She assured me that she would collect rice from all the residents there and keep them in Mutharamman Temple. She also recollected the previous years’ Anna Pooja and told me that the rice given as prasada from Annapooja blessed them with immense wealth and health. Vivekananda Kendra only taught us involve in giving and gaining. I felt proud of her commitment towards Kendra.

Renuga Bai – Kalingarajapuram - Kanyakumari district
This happened while distributing the notice for the Anna Pooja. We were in the shopping zones of Marthandam. When we approached the shopkeepers some got irritated and some others donate without much interest. Only a few welcomed us and enquired about Anna Pooja and then donate rice or money as they wished. Among them a shopkeeper running a little corner shop went through the notice and told us that till then no sales in his shop. But we had come for a good cause and hence asked us to take one kg of rice and Rs. 50/-. He also asked us to approach same big stores where we could get more rice and donation. We were much impressed by that poor shopkeeper’s approach and thanked him.