“Eknathji - One Life One Mission” film show at Hyderabad 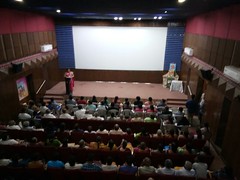 On the occasion of Sadhana Diwas, Vivekananda Kendra Kanyakumari’s Hyderabad held a special show of Ma. Eknathji’s biopic “Eknathji - One Life One Mission”.

The venue was the preview theatre of Sri Sarathi Studios - one of the first film studios of Hyderabad. Over 170 people, including old and new karyakartas, and well wishers attended the film show. Chief Guest was Brahmachari Shyam of Ramakrishna Math, Hyderabad and the function was presided by Prant Sanchalak of Telanaga-AP Justice CV Ramulu.

The 108 minutes long film was seen with keen interest by the audience and was inspired by the life, work and message of Ma. Eknathji Ranade. After the film, prasadam was distributed to all.