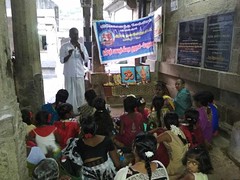 Vanakkam. We are happy and obliged to send you the activity report conducted by VKRDP. The details of our activities, for the month of January 2017, are listed for your ready reference and kind information.

1.     “Sri Rama Jaya Rama” Mantra was chanted during Deepa Pooja, Shivalinga Pooja and daily by our Balwadi school children, cultural class students and during monthly meetings by our Balwadi teachers and Social Workers. Every month nearly 9, 22, 890 times mantras were chanted in 84 localities.

2.    Through 75 Balwadis, 2,078 rural Children were nurtured.  In all the Balwadis, Malt along with hygienically prepared highly nutritive lunch with vegetables was served during the day. And in the evening vitamin-rich cereals were provided to the children.

3.    In our Medicare Programme, 2049 patients were examined and treated for various common ailments, through 14 Rural Medical Centers in Kanyakumari, Nellai and Thoothukudi districts.

4.    In 174 Samskara Vargas, 6297 students participated.  The students were taught about the values of Indian Culture, through games, lectures & lessons.  The feelings of oneness were strengthened among participants, through patriotic songs and games.

5.    Under Adopt a Grannie Programme, 31 destitute and old people were provided with monthly solatiums, in the form of rice, dhal, oil, etc., for their livelihood and 112 persons provided rice only, in Southern four districts of Tamilnadu.

6.    Monthly Deepa poojas were organized in 235 village temples in five districts of Southern Tamilnadu, in which 9418 ladies participated and offered prayers for the welfare of self, family and the society.

8.    Through various branch centers, including Thoothukudi A.O. and book stalls, literature books were sold for Rs. 1,03,435 /-

9.    Vivekavani Subscriptions for 104, and two Yuva Bharathi and 72 Patron were collected.

10.    80 women are being benefited in 4 Self Help Groups in Kanyakumari district.

11.    Yoga Varga has been conducted at 02 places,  Kovilpatti and  Aruppukottai in which 41 persons attended.

12.    4 tailoring units are functioning well in Nellai & Kanyakumari districts with the total attendance of 81.

13.     Shivalinga Poojas were conducted at 03 places in Kanyakumari District and 172 members participated.

14.    Durga Pooja was conducted at 03 places, in Kanyakumari District in which 187 devotees participated.

15.    Eye camps were conducted at 2 places, in Kanyakumari and Nellai districts in  which  340  were  treated  for  their eye  ailments  and 58  unter  went cataract  operation.  26 persons  were  given  eye medicines and 18 persons were given spectacles.

23.    Parents Meeting  conducted in Kanyakumari district at 3 places and 64 participated.

This month, we have distributed the rice which was collected through Amrita Surabhi and Anna Pooja   to Balwadi children, old poor people and the institutions as mentioned below:

E.Santhi - Vallioor - Tirunelveli District     On 21st March 2017 I was in Samuharengapuram Creche. I saw that two children were talking with themselves.  I asked the teacher about it. They informed that the children are talking of Swami Vivekanandar Jeyanthi vizha junction and practice the drama, which proposed to conduct. And also they asked the children to play it before me. Both the children play the drama in well manner. Last year one child namely Ganga told the name of 60 Tamil years, correctly. This time she told the name of 27 stars clearly. Each and every children’s sing the songs very nicely. This incident touched my heart. M.Sekar - Vallioor - Tirunelveli District     My self, my wife and daughter participated in the tour programme sponsored by Siva Priya Ashram, Elanji on 18th and 19th of Feb 2017. The Tailoring School students (free) Cultural class students were also joined with us. We went to Tiruchendur, Rameshwaram, Danushkodi, Uthragosamangai and Tirupullani and worship the lords. Brother Karuppasamy made the arrangements very pacca and nicely. In Rameshwaram we received the hospitality of Ramakrishna math. We met the students of Cultural classes and free Tailoring School students and their teachers. It was an excellent experience in short.     More over, in Rameshwaram, the speech delivered by the Secretary, RDP was also very enthusiastic and encouraging. We directly saw the love and affection of Italian Brother Shri.Gladise and Sister on our cultural students and even on our temples and culture. In the tour one more additional attraction was Madha Amirthananda Amma’s Bhajan Songs. It filled up our heart fully.     On 19th we met all the Brothers, Sisters and people who came to attend our Anna Pooja at Rameshwaram. It was a very happiest occasion for us.

R.Sakunthala -Peyankuzhi - Kanyakumari District           I was waiting for a bus, in Sayalkudi Bus stand. Some ladies were standing nearby me and I understand they were waiting for Madurai Bus. They left that my language slang was different and asked about my native. I informed that I belong to Nagarcoil and working as a volunteer in Vivekananda Kendra at Ramnad.     Then immediately one old amma came to my side and requested, “Daughter I have changed Rs.2000/- and here are the money. Please count and confirm it.” I thought why this amma is choosing me to count the money while there are so many people on surrounding; she and also I felt fear, in my mind.     The other women also insist me to count the money, without knowing my fear! Seeing my hesitance, that amma come still more nearer to me and said, “Since you told that you are working for Vivekananda I believe you and request you. That is no other reasons”.     Hearing this, I feel very, very happy. V. Janakipushpam - Vallioor - Tirunelveli District     District level Cultural competitions were held at Ambai on 22nd January 2017 following that, on 24th January 2017 competitions were held at Vallioor. Every year, parents meeting will also be held simultaneously, while competitions were held for children’s. Normally, the parents will hesitate to attend the meeting. Every time we have to compel this to attend the meeting. Even 50% of the parents will not attend.     But surprisingly, this time, almost all the parents voluntarily attend the parents meeting without any compulsions, I wondered why this happened?. On my analysis, I understand that because of the importance of the points discussed in the meeting attract them and make this to sit and listen. We discussed in the parents meeting about Health, service to others. Children’s Education and family integration.     More over, in the speeches of Annaji and Ayyappanji, only the people’s health and wealth is being presented, without any selfishness. This attracts the parents. Even after their speech, no bodies left the place. But they again discussed the matters within themselves! Even some parents openly convey their thoughts! Some parents request for ideas and advices.     They are very much interested in purchases book in our book stalls and subscribe for over Vivekavani monthly magazine voluntarily and willingness. It touches my heart feelings. P.Tamil Selvi - Thoothukudi      I sent my daughter to Kanyakumari to attend the 15 days Yoga camp on 1st Dec 2016 she well attended 15 days yoga and performed including Yoga, Diyana and understand to attend her own works by herself! I think, this camp has brought some good habits and change of mind also. After returning from the camp now she is doing all her own works by herself. Not only that, she is also helping me in my day today work, like cleaning of house etc. Now a days I also feel very happy, to see the develops of my daughter.     If the parents of children sent their children to the camp, they will also see the changes the activities of their sons and daughters immediately.

I am planning to send my daughter to next camp also.