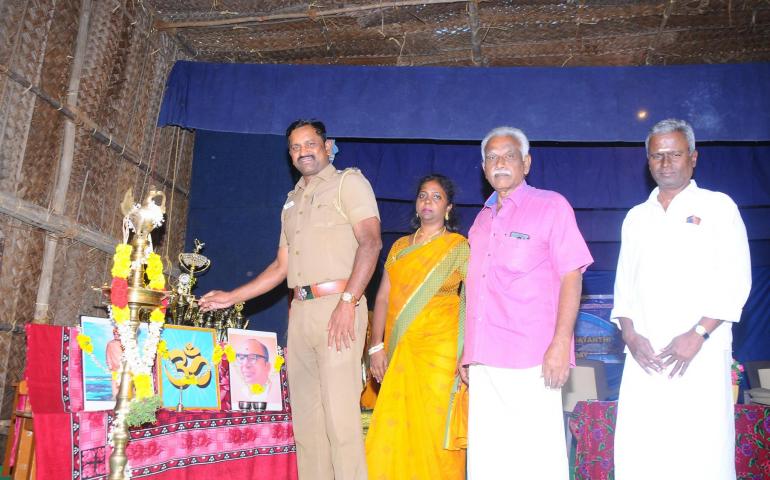 We celebrated the 157th Janma Diwas of Swami Vivekananda, 30th Annual Day of Vivekananda Kendra Vidyalaya vallioor and National Youth Day on 11.1.2020 in a grand manner. The programme began  at 4.30 pm. It was compeered  in two language Tamil and English by our teachers. It is our 50th year of Rock Memorial  to highlight  this our teacher also said the quotes of swami Vivekananda in between the cultural programme.  On this occasion the programme was inaugurated by our honourable chief guest Mr.Tirupathi, Inspector of Police by lighting the lamp. The celebration was initiated with an invocation song sung by the students of Vivekananda Kendra Vidyalaya vallioor. Welcome address by our teacher K.Rajasri followed by Annual report by our Principal Mrs. N.Maheshwari.

The academic toppers as well as extra curricular activity toppers were honoured by giving prizes. The prizes were given by the chief guest, guest of honour, correspondent and principal. One of our teacher Mrs. Sowmiya read out the name of the winners. Chief guest Mr.Tirupathi addressed the audience. He also praised and appreciated the students who received the prizes in various curricular and co curricular activities. Mann. Ayyapanji, RDP Secretary, Kanniyakumari gave an eloquent speech on Swami Vivekananda  and also advised the parents to educate their  children.

Correspondent S.K.Subramanian  and guest of honour Mann.Ayyapanji, RDP Secretary, Kanniyakumari presented the memento to the chief guest. Vote  of thanks was proposed by our teacher Mrs.Chandra Selvi. Cultural programme was compered in two language. English by Miss.Santha Kumari and Tamil by Mrs.Muthulakshmi.  Quotes was said by our teachers Tamil by Mrs.Pavithra and English by Miss. Jeyasri. The programme was concluded by Kendra Prayer at 8.30 p.m.
Presided by :  S.K.Subramanian  (Correspondent, VKV Vallioor) ,  Chief guest :  Mr. Tirupathi , Inspector of Police, Vallioor,  Special Guest : Mann. Ayyapanji  [RDP Secretary, Kanyakumari]