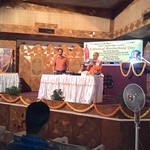 Two Universal Brotherhood Day programs are organized in Kamrup bivhag at Guwahati today by VK Branch Guwahati. One at Ugratara Nagar, Guwahati with 270 attendance and other by Initiative of a Kendra Karyakarta Smt Minati Dey Ulubari Vistar Pramukh in a NCRT Teacher Training Program with 70 teachers from different districts of Assam. Swamiji's Chicago address was read and discussed amongst the teachers after deliberation on the Importance of the day by Smt Minati Didi.

In Ugratara Nagar Swami Devaswarupananda Maharaj Assistant Secretary R.K.Mission Guwahati was chief guest. In His deliberation Pujyapad Maharaj ji  narrated the background of Swamiji's journey to the World Parliament of Religion, its impact on West and East. Dr. Saraju Das Former HOD Dept of Philosophy Handique Girls College, an Educationist and Social worker was Guest of Honour. She emphasized on Swamiji's call to the youth of India. Three books were released.

A group of ten Karyakartas presented a chorus on the occasion.

The follow up program with five yoga satra in Guwahati was announced.

On 10 September for the first time in newly formed Kamakhya Nagar UB Day was celebrated. Attendance was 28. Man. Meera Didi was present as speaker. Swamiji's life from Naren to Swami Vivekananda, His realization in Sripad Shila the solution of National problems as Raising the dormant spirit and organizing the mass and the purpose of attending WPR was the core of lecture.

One more program on Universal Brotherhood Day had been organized at Vasistha Nagar, Guwahati on 13 September 2015.