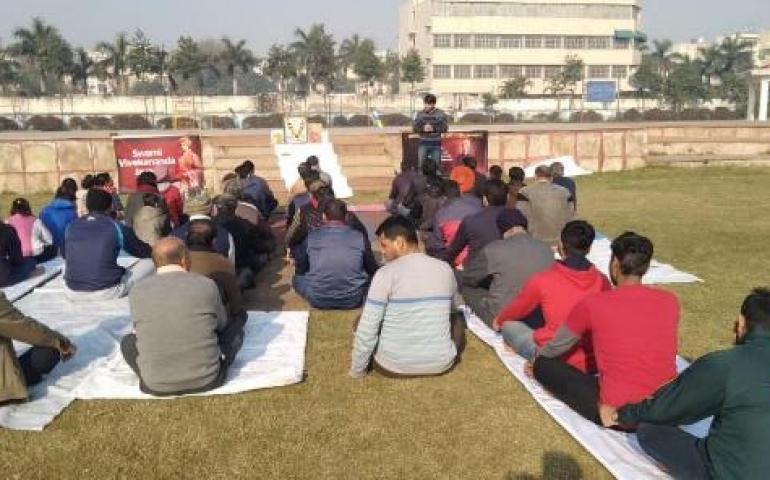 “Arise, awake and stop not till the goal is reached” are few of many inspirational words which are lived and preached by Swamiji and till now carry the power to lead mankind. With this inspiration, Janakpuri Nagar, in association with RWA Govt. Press colony, celebrated the 157th Birth Anniversary of Swami Vivekananda, at Swami Vivekananda Park, Mayapuri, New Delhi.

On the occasion, members of RWA, residents of govt. press and nearby colony, and karyakartas from Janakpuri Nagar were present. Presence of around 50 people were observed. Program was scheduled for 09 – 10 in the morning. Karyakartas were present before an hour for necessary preparations. Program started off with 3 omkars and Shanti mantra followed by yogabhayas. As, swamiji gave the importance to a healthy body with the need of mental fitness, program was framed contained shithlikaran and suryanamaskar. Games were also being played like ghoomta kila, and pathhar daud. This was followed by geet “dhram ke liye jiye…” taken in lead and follow. Later, Trivendrum ji and Naresh ji shared in few words about Swamiji’s life and work. Neema didi shared knowledge of Kendra’s work and  activities. Sh. Surendra Vashishtha ji (Vice-president of RWA) spoke words of thanks and called for pursuing such activities in the park. Book stall was also put up from where people got the chance of purchasing related literatures of swamiji.
Program ended with Shanti mantra and Kendra prarthana.