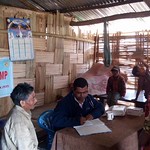 where 207 patients were examined and treated in Lazu and Khonsa areas. In the later parts of the month 7 camps were organized in Khimiyong and Bordumsa areas of Changlang district, where 601 patients were treated. Free medicines were distributed to all the needy patients. The Medical team of Vivekananda Kendra along with the mobile medical van conducted the camps as people are suffering from various diseases in these remote areas as the monsoon is arriving.