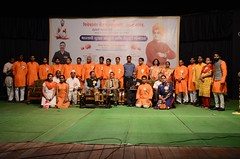 Nanded NCC cadets welcomed Major General Shishir Mahajan by giving guard of honour. The Vivekananda Kandra Nanded members extended traditional welcome after the guard of honour. In the beginning the dignitaries offered obeisance to the portraits of “Bharat Mata”, “Swami Vivekananda” and “Rajmata Jijau”. Mangalacharan was  recited in starting of the program. Essay competition for school children was held during the Samarth Bharat Parva. Elocution competition for college students was held during Samarth Bharat Parva. The winners of essay competition received the prizes from the dignitaries on the dais. The winners of elocution competition were given the opportunity to speak to the present audience before receiving their prizes.

The program was inaugurated by an eminent industrialist Shri Narendra Jadhav. He asked the students to live the man making education principles of Swami Vivekananda. The excessive competition in education is creating new problems and Swamiji’s directions are very helpful to negotiate the pitfalls in the present education system. Shri Arun Joshi, Vivekananda Kendra Devegiri Prantpramukh explained the objectives and functioning of Vivekananda Kendra. He appealed the audience to support the kendra activities in Nanded and around. The chief guest Major General Shishir Mahajan with the help of power point presentation elaborated on the national security issues and how citizen can help security forces to tackle these challenges. He emphasized that the strong government of a nation helps the security forces to meet their challenges effectively. How security forces in the past negotiated the issues with China and Pakistan was explained in detailed manner. In peace times the security forces help the civilian government to tackle natural disasters and internal challenges. The present Doklam crisis was explained to the present audience in a detailed analysis.  Major General Shishir Mahajan answered the questions of the audience.

The president of the function Shri Gajanan Mahajan appealed students to realize the dream of Swami Vivekananda of a Samarth Bharat in a very short time. Mrs. Ashwini Manthalkar compered the program. Shri Anil Doiphode proposed the vote of thanks. The program ended with Sow. Manjiri Purandare’s recitation of Vande Mataram.