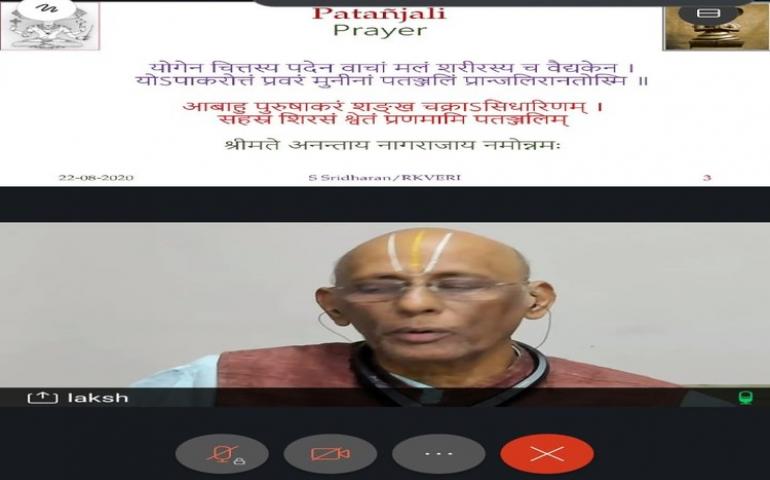 Vivekananda Kendra Kanyakumari, Paschimbanga Prant has conducted a series of Five Discourses on the four paths of Yoga and their synthesis in commemoration of the 7th International Day of Yoga through Webex & YouTube Live.

On 19th June Shri S. Sridharan Ji (Member, Board of Trustees, Krishnamacharya Yoga Mandiram, Chennai) gave a talk on Raja Yoga' (3rd Discourse). It started with the welcome speech by Supriya Chandra followed by Shanti Path.
A brief introduction of the speaker was given by Ma. Debasish Lahiri (Sanchalak,Eknath Vibhag). Thereafter, Shri S. Sridharanji presented a crisp exposition on Raja Yoga. With warm gratitude expressed to Swami Atmapriyananda ji Maharaja and his Guru, Sri S. Sridharanji commenced his discourse on Raja Yoga. At the outset, he recited the prayer of Patanjali and this he followed with a prayer composed by him in reverence of Swami Vivekananda and two of his other Teachers.

Sridharanji drew extensively from Patanjali’s Yoga sutra and Swami Vivekananda’s Raja Yoga to place the context, the origin of Yoga, its approach, the essential message, specialty among the various Yoga forms, the need and use of commentaries of Yoga Sutra, etc. He entered into an elaborate elucidation of the origin of the Yoga, hence spoke at length about the Vedas and essence of Upanishads. In his extraordinary discussion, he covered areas such as the science of Raja Yoga, practice as the foremost path to realization, control of the psychic prana, and concentration and meditation. The clarity and precision of the talk on such a significantly solemn topic was remarkable.

The program concluded with a vote of thanks by Ma. Debasish Lahiri (Sanchalak,Eknath Vibhag) followed by Santi Mantra. The whole program was conducted by Ma.Nirmalya Bhattacharya (Sah Prant Sanchalak, Paschimbanga Prant).