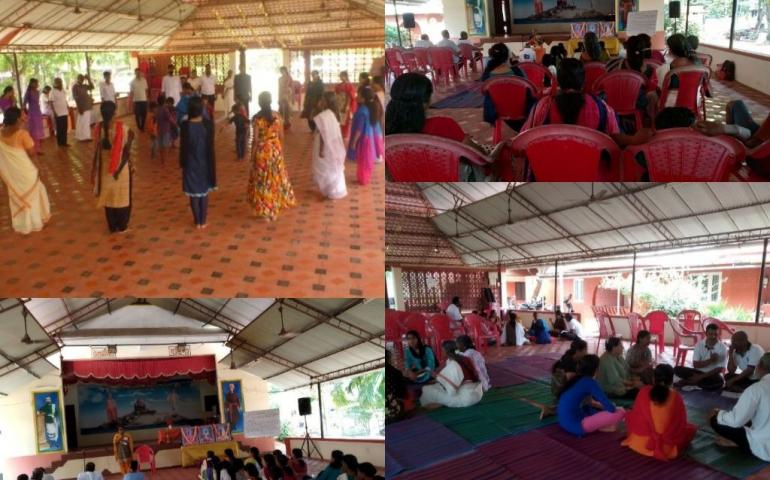 Sthanik KPS was organised from 17th to 21st at Kodungallur. Along with local Karyakartas, welwishers, Yoga varga and  and Sanskar Varga students attended the shibir. During the games session Sishuvihar children too participated.The daily routine started with prayers followed by Bhagavad Gita chanting. There were two lecture sessions in a day. Daily Swadhyaya Varga and bhajan session were also part of the schedule.

The camp witnessed the active participation of 50 Karyakartas of  in and around Kodungallur who were  motivated and committed.There were overall 5 members in the organising team. The five day shibir was inaugurated by Mananeeya Lakshmi Didi. In her addresses, she highlighted the unique features of Indian Culture and how one should make it part of their lives. She appraised all about the need of spreading the message of Bharat in a big way and appreciated the participants for their willingness to come and attend the shibir.

Adaraneeya Radha Didi, Dakshin Prant Sanghatak, briefed the objectives of the camp followed by the singing of Shibir Geet by Adaraneeya Kalyani Didi from V.K. Thiruvananthapuram branch. The first day made the participants to ponder over the qualities of a true worker of Kendra and the discussion among them drove home the work of Karyakartha is the journey from unreal to real and death to immortality.

The Kendra Varga sessions specially planned by Kumari Bhuvaneswari Didi from VK Nagercoil branch, on all the days provided an exposure to all about the objectives of the Kendra varga and the methodology of conduction as it is one of the main karyapadhati of Kendra.

The remaining days Mananeeya Lakshmi Didi spoke in detail about the Holy Trio throwing light upon the significance of studying their lives by a Karyakarta. since their life and message are based on the realisation of the highest truth. She requested every Karyakartha  to imbibe the spirit and ideals for which they stood for and work for the Nation.

Adaraneeya Radhadidi spoke on Kendra prarthana and VK activities and Adaraneeya Sudhakarji led the two sessions on Man. Eknathji and the Story of Rock Memorial respectively. The participants had an in-depth study of shaping a karyakarta as the backdrop of the vision of Vivekananda Kendra that was really visible in the question and answer sessions and presentations.They took a vow to take up the works by adopting  one of the kendra paddhati in the Ahuti Satra.The whole camp reverberated with the chanting of prayers, patriotic songs and bhajans at the Bhajan Sandhya.

On the concluding day, the report of the shibir was presented and Man. Lakshmi Didi gave her blessings. The Shibir concluded with Kendra Prayer.

Samskarvarga prashikshan Shibir was organised at Anandadham, Kodungallur, from 22nd May to 26th May. Mananeeya Lakshmi Didi inaugurated the Shibir. This being the prashikshan shibir, there were more of practical sessions rather than lectures. The participating children came in and around Kodungallur and couple from Thrissur. The Organizing team consisted of 12 members.

The camp  concluded on 26th in which Ma. Lakshmi Didi advised the children to equip themselves and then guide the youngsters who would draw inspiration from their Varga shikshaks. All the children took the sankalpa of starting Samskarvarga in their localities as early as possible. In all 45 children and 5 parents participated all the 5 days.